As the European market for transparent solar panels grows, Swiss scientists have set a new efficiency record for the technology. This could pave the way for energy-generating windows that power our homes and appliances.

Previous versions of DSCs relied on direct sunlight, but a team of researchers from the École Polytechnique Fédérale de Lausanne (EPFL) has found a way to create transparent photosensitizers. that can absorb light across the entire spectrum of visible light, both direct and ambient light.

Join AS in Valencia!

The researchers developed a way to improve the combination of two newly designed photosensitizer dye molecules. They did this by creating a technique in which a monolayer of a hydroxamic acid derivative is pre-adsorbed onto the surface of nanocrystalline mesoporous titanium dioxide.

On top of the new photosensitizers that are able to harvesting light across the entire visible domain, the scientists have also improved the photovoltaic performance of the DSCs – which was a weak point of the technology compared to traditional solar cells.

To put that in numbers: the efficiency of the improved DSCs reached over 15% in direct sunlight and up to 30% in ambient light. For reference, commercial solar panels have an average efficiency between 15% to 22%.

In other words, if this technology can reach scale, we may soon see a transparent solar panel revolution in Europe.

How are DSCs already being used?

DSCs are not new technology, but the advances of the École Polytechnique Fédérale de Lausanne could provide a lifeline for sustainable buildings.

Dye-sensitive solar cells are not: only transparent, but also possible manufactured in multiple colors and at a low cost. Some are even used in skylights, greenhouses and glass facades.

For example, consider the SwissTech Congress Center — a site that became the first public building to install DSC technology in 2012.

While in 2017 the Copenhagen International School also used the same technology to inaugurate the building with 12,000 colored solar panels, meeting more than half of the school’s annual energy needs.

And from 2021, the Netherlands-based company Physee Install 15,000 of its ‘SmartWindows’ in office buildings across Europe.

The scientists at the EPFL have improved the technology’s ability to work in low light, something vital in cloudier, colder countries.

As the authors wrote“Our findings pave the way for easy access to high-performance DSCs and offer promising prospects for applications such as power supply and battery replacement for low-power electronic devices that use ambient light as an energy source.”

For European startups, this could be a game changer. While there is a clear benefit to installing transparent solar cells on buildings to help meet countries’ climate goals, the applicability of the technology extends beyond energy-generating windows and glass facades.

DSCs take up much less space than traditional panels, allowing them to be used for a wide variety of items, whether they’re wearable electronic devices (like earphones and eReaders) or connected sensors that are part of the Internet of Things.

When a scientific advancement like this takes place, it opens the door for bright minds to create something new and efficient. Let’s hope Europe’s startups are ready to move on.

You will find the full study here. 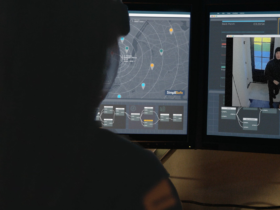